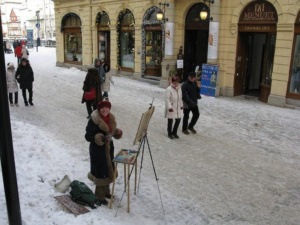 1968 Born in Sarnen, grew up in Kerns, Obwalden Switzerland

Since 2001 has led Experiment 2 and Summer painting course of School of Seeing in Sázava, as part of the summer philosophical school in Centrum nadace Prokopius in Sázava

2012 Co-founded an organisation called “Friends of School of Seeing”

Ateliers in Poděvousy, Prague, and in the Canton of Obwalden, Switzerland

Exhibited in Switzerland, the Czech Republic, Germany and Moscow

The most important thing for my painting is to work directly in front of the motif. I need to see what I am painting. It does not matter if I am standing right in a potato field or sitting among regulars in a pub – I always try to capture the scenes right in front of me using colourful patches. Even at 11 degrees below zero in the town centre, I will set up my easel and begin to paint unless there is someone to stop me.